A mower was purchased. A lawn was mowed. But it’s me so you know it’s not that simple.

We went to Home Depot yesterday and I got a battery powered Ryobi lawn mower. It’s not a Porsche, it’s not a Pinto, it’s somewhere in between. I wasn’t looking for the best, I just needed the blades to be sharp and the wheels to be round.

Disclaimer: you’ll find that I keep my expectations fairly low which sounds sad, but it helps the optimist in me be pleasantly surprised when things go well. Whatever keeps your clock ticking, right?

The mower was all clean and shiny when it came out of the box and the first few push tests last night were easy. (insert a scoff here, now having finished the yard)

I plugged the battery in to charge overnight, turned the lights out (this will be an important detail later) and went to bed early.

The kids aren’t here this weekend so the first order of business for a Saturday morning is to sleep in as late as possible. Dottie (the girl dog) started howling at 7:15am. I spent the next 15 minutes Googling mussles for her. No purchase was made (yet) but threats were given.

After a few morning chores and consumption of much coffee, I dressed the part of an avid mowerist – shorts, tank top, sunglasses, Spotify, earbuds and Vitamin Water.

I ran inside to get the battery and to my dismay, it wasn’t charged. I turned the overhead light on to see the fine print and magically it started charging.

Then it hit me – I had chosen the one and only outlet in the house that turns on and off with the light switch. After some words I won’t repeat, I picked another outlet and watched the battery light blink at the starting line.

I putz around until the battery was charged around 9am and head outside to rock my first mow job. I know that will baffle some of you, but I have never really mowed before. That was dad’s job in my house growing up. Not because it’s a man’s job, but because my dad loved to mow. Or at least that’s what I thought growing up. Now having done it, of course he didn’t love to mow. Who would love that hellish job? But I honestly thought he did when I was young.  My bad.

A few things to think about before I go on:

I live on a rather large hill + It’s not a self-propelled mower + the grass is at least a foot high = I’m sweating to the oldies within 5 minutes.

Because the grass was so thick/high, I had to mow every row twice. I made it about half way down the hill before the battery gave out and left the great divide (see below). 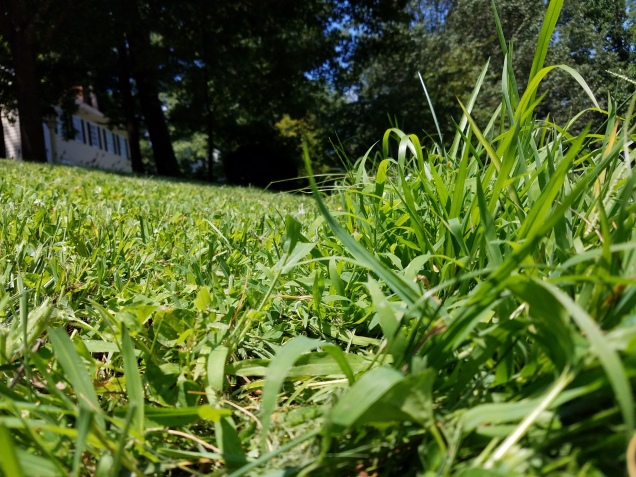 So inside I go to charge the battery, and outside I go to get the weed whacker. I got about half way down the hill before the strings quit on me.

With no replacement spool, I ditched the whacker for the hedge trimmers. On the first blow they break apart, never to be bound again. I got a pair of utility scissors and went nuts on the bushes.

Disclaimer: I am extremely determined (some say stubborn, but I don’t talk to those people much) when I want to be.

The good Lord was trying to get me inside though because it’s now 11:something and 90 degrees.  I’m drenched and my legs are bloody from wearing shorts while mowing/trimming.  Pine cones are mean.

I go in for mass quantities of water and see that the battery has charged enough for me to finish the yard.  It is now 12:30pm, over 90 degrees, 1000% humidity and the yard is only slighted shaded. Shoot me.

You should see the zigzag rows in the grass. Y’all, it looks like a drunkard mowed the bottom half of the yard today. It was so hot that I could actually see the Pokemon GO characters jumping around laughing at me. It was Mow-jo GO!

The battery died again as I was wrapping up, reinforcing that it was time to call it quits and cool down.

So let’s recap – it took one mower, two battery lives, one weed whacker, two extension cords, one hedge trimmer, one pair of utility scissors, one rake, four hours, six Vitamin Waters, three band-aids and two gallons of sweat to do my yard today…

And I’m not even finished.

One thought on “Mow-jo GO!”