This weekend was filled with friends that I don’t get to see as often as I want, but I can laugh with like no time has passed at all.  Those are the best kind, aren’t they? 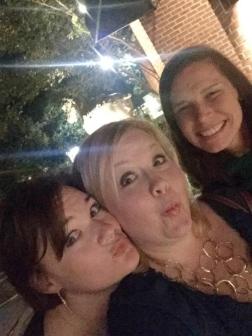 We solved world problems, had mini therapy sessions, guided one another on the can’t-miss tv shows premiering this fall, figured out what motivates men (that one didn’t take long), rolled our eyes at the Presidential Debate, compared parenting wins and fails, and just laughed… a lot.

But one thing that kept creeping up in this weekend’s conversations was mother’s guilt.

No book can explain the power of it to a woman without children.

No girlfriend can express the ripple effect of it before your baby is born.

No mother can escape it forever.  It can sneak up on you when you least expect it, over the tiniest little things.

You think you’re on your A game after cleaning the whole house but you recycled the artwork that’s been on the fridge for 6 months, and now they are hurt because they made it just for you and wanted you to keep forever. BOOM! There it is.

You’re tired and don’t get that last load of laundry in the dryer which means they are the only child in class who won’t have their blue shirt for Spirit Day at school.  BOOM! There it is.

You want to accept the great job offer that would allow you to actually use your brain again but might mean picking them up later in the evenings.  BOOM! There it is.

You drop them off at daycare and leave with their tears still wet on your shirt because they will miss you.  BOOM! There it is.

You hold them close while they cry on your shoulder and ask for the millionth time why you and daddy can’t live together again.  BOOM! There it is.

You go out with friends for the first time in a year to have a dinner that doesn’t include macaroni and cheese.  BOOM! There it is.

You get on to them over something you normally would let go because you’ve had an awful day at work that depleted your patience.  BOOM! There it is.

The guilt is real – definitely for the big stuff but even for the stupid little things.  You know you’re a good mom, even a great one some days, but that guilt is wicked y’all.

I can’t be sure, having never been one, but I don’t think fathers have this level of built-in guilt.  They seem to function as good (some days great) dads while still escaping that dreadful feeling.

But maybe it’s time to let go of the constant worry and just have faith that you are doing the very best that you can.

As long as they feel safe and loved, everything else is gravy.

As long as you take a minute every day to remember how blessed you are, everything else will fall into place.

As long as you remind them that you are their biggest fan and nothing they do will ever change that, they are the luckiest kids in the world.

As long as you teach them to work smart and hard, they will learn to appreciate what they have.

And after all that… maybe, just maybe, they won’t live with you at 30 and skip their shift at Taco Bell to get a “No Regerts” tattoo and wonder why they aren’t taken seriously.

BOOM! There it is.